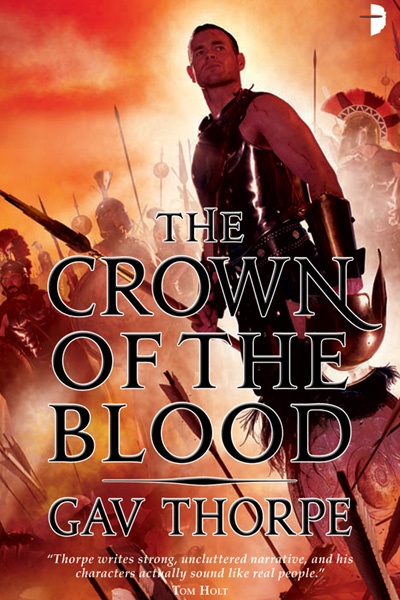 The Crown of the Blood

He had brought his master’s Empire to the furthest reaches of the world. All had fallen before him. Now he longs for home.

The first book in the Empire of the Blood series

He had brought his master’s Empire to the furthest reaches of the world. All had fallen before him. Now he longs for home.

Now it’s time to take the long journey home, back to the revered heart of the great Empire he had helped create for his distant masters. But when he returns to the capital, life there is so very different from what he had believed. Could it be that everything he has fought for, has conquered and killed for, has been a lie?

“I tore through The Crown of the Blood in one long sitting… This is a properly high fantasy world – rock people, dark sorcery, landships, riding panther and (of course) dinosaurs – but all of it is introduced naturally and casually… his book is hairy, gory, sweaty, shameless… and perhaps even a little bit thoughtful.”
– Pornokitsch

“This is one of Thorpe’s best novels. The setting and story are well thought out and are remarkably logical for a fantasy novel. If you enjoy military or historical fiction, you will enjoy The Crown of the Blood. Action, intrigue, conquest, and charismatic generals are waiting for you here!”
– James Atlantic Speaks

“The Crown of the Blood (Gav Thorpe) is an old-fashioned sword and sorcery romp. There’s not a great deal of sorcery, but there’s lots of fighting and plotting and planning to conquer… it’s a fun book. This book is for readers who want a blast from the past; who want their hour of adventure in a strange world.”
– Gillian Polack

“This is an absolutely fantastic novel; I recommend it.”
– Daniel’s Thoughts

“The Crown of the Blood should really have a warning sticker on the front (Angry Robots take note) it’s one of those books that are almost impossible to put down, so much so that you find yourself unconsciously continuing to (try to) read after getting up to make a brew / go to work / go to bed (delete as applicable and don’t try this at home kids). The novel also stands out with a very strong opening scene and excellent end, with a genuinely unexpected twist.”
– SFBook.com