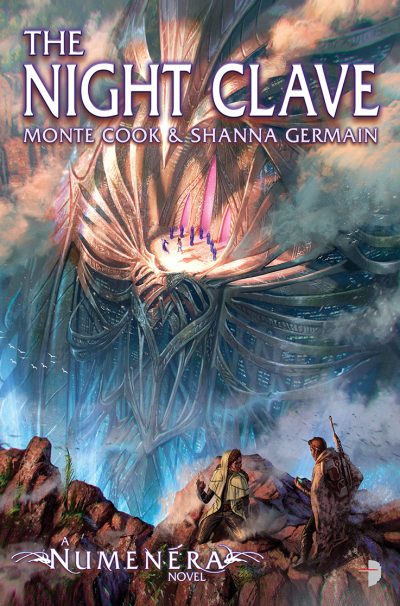 Science fiction adventure in a decaying far future setting in the new tie-in novel from the popular Numenera tabletop and PC roleplaying games.

A Standalone Novel of Numenera

In the far-future Ninth World, claves of Aeon Priests help their community understand and use the mysterious technologies of the past. But what happens when a group of these priests uses this knowledge and power to exploit the people who depend on them?

In the region of Steremoss, a group of brave individuals are determined to resist this oppression from the shadows. They call themselves the Night Clave.

Praise for the Numenera novels

“A carefully woven tale that builds slowly, rewarding patient readers with revelation after revelation, building to a crescendo at the climax.”
– Barnes & Noble Sci-Fi & Fantasy Blog

“Despite the setting and sci-fi/fantasy blending, this novel is an intense character study of a woman trying to literally rebuild herself. The writing is lovely and borders on the poetic. Equally impressive is that despite the strange setting, language and terms, and wondrous tech, Germain grounds the world through the characters and keeps the focus on them. The mystery of the poison-eating ritual and the looming threat of invasion drives the story, but the focus is ever on Talia, her past, and an unsure future. Overall, this is a fantastic sci-fi/fantasy novel but readers of any genre will fall deeply into Talia’s story.”
– San Franciso Book Review

“I really enjoyed it. It is absolutely completely other worldly.”
– Ever the Crafter

“For fans of Sci-Fi, Fantasy, Dystopia, and books built on the structure from a RPG, this is a great read.”
– Pop Culture Beast

“Entertaining enough that I gladly read the whole thing and enjoyed the ride.”
– Blogger’s Bookshelf

“Germain’s realization of Enthait is vivid, to the point that the reader can taste the dust in the air and murmurs of a living city like bees buzzing around the hive, and her ability to twist a story round history and half-dreamed memories builds the kind of novel that is tantalizingly missing just the right pieces to pull the reader in until the end.”
– King of Books

“Readers who enjoy their fantasy and science fiction together need look no further than the mech-enhanced cast of characters in this alt-world fantasy story. Like the work of Kameron Hurley, this novel is bleak, full of tough-as-nails women willing to do what they must to survive, yet tells a universal story that many fantasy fans will relate to.”
– I Am Booking

“A rich and vivid read. Highly recommended!”
– All Booked Up

Monte Cook has worked as a professional writer for more than 20 years. As a fiction writer, he has published numerous short stories and two novels. As a comic book writer, he has written a limited series for Marvel Comics called Monte Cook’s Ptolus: City by the Spire, as well as some shorter work. As a nonfiction writer, he has published the wry but informative The Skeptic’s Guide to Conspiracies. His work, however, as a game designer, is likely most notable. Since 1988, he has written hundreds of tabletop roleplaying game books and articles and won numerous awards. Monte is likely best known for Dungeons & Dragons 3rd Edition, which he co-designed with Jonathan Tweet and Skip Williams. In 2001, he started his own game design studio, Malhavoc Press, and published such notable and award-winning products as Ptolus, Arcana Evolved, and the Book of Eldritch Might series. As a freelance game designer, he designed HeroClix and Monte Cook’s World of Darkness, and he has worked on the Pathfinder RPG, the Marvel Comics massively multiplayer online game, and numerous other games and related projects. He is the designer of Numenera.