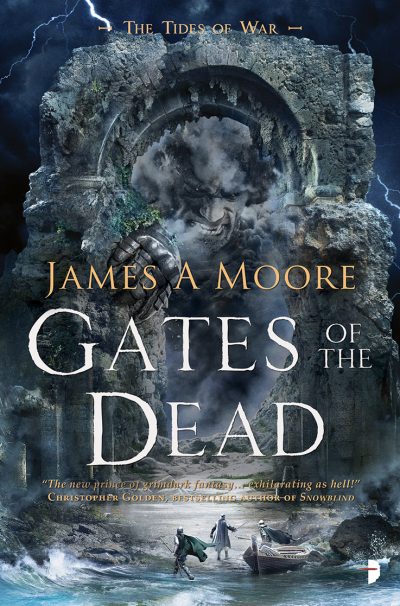 Gates of the Dead

The end times have come, but it’s not too late for a hero to strike back,  in the grimdark fantasy sequel to The Last Sacrifice and Fallen Gods.

Brogan McTyre started a war with the gods, and he’s going to end it. Raging gods have laid waste to the Five Kingdoms. Only Torema remains, swollen with millions of refugees. Their last hope lies in fleeing by sea, but as storms tear at the coast, even King Opar can’t muster enough ships for them all. Brogan and his warriors must fight the He-Kisshi to reach the Gateway, the sole portal for gods to enter the mortal world – and the only place where they can be killed. But the forces of creation have been unleashed, and they’ll destroy the world to reshape it.

Praise for the Tides of War

“Moore has laid the groundwork for a trilogy that promises to be loaded with terrifically grim fantasy storytelling. I might even call it epic. There is a lot of swift, merciless violence in this book, mingled with an undercurrent of very welcome, if very dark, humor. All of it together takes me back to what made me giddy about epic fantasy way back when. I’d say I’m happy to be back, but I’m not sure that’s quite the right word for a book packed with this much violent incident. Let’s say instead that I’m bloody satisfied.”
– B&N Sci-Fi & Fantasy Blog