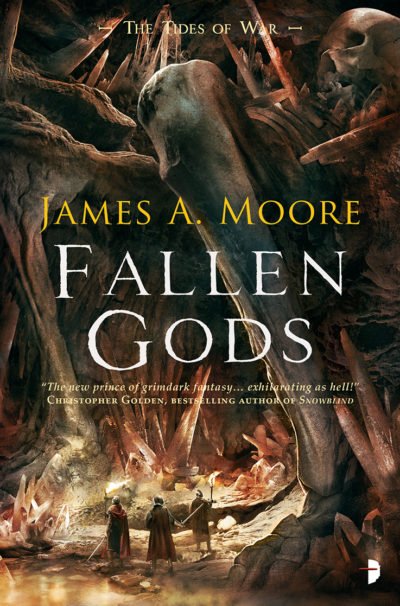 File Under: Fantasy [ Hunting the Gods | Slaves of Heaven | A Time for War | The Fallen ]

Book Two in The Tides of War Series

Brogan McTyre and his compatriots are wanted, dead or alive. Preferably alive, so they can be sacrificed to the raging gods. All they can do is hire more mercenaries and turn them into a fearsome army. But warriors aren’t enough when the gods bring Armageddon to the world, unleashing storms and madness, and ceaseless attacks on Brogan’s men by increasingly demonic foes.

Deep in the heart of the Broken Blades Mountains lies a sword containing the heart of a god slain in immortal combat, the one thing that might give Brogan an edge against the gods, but finding it isn’t going to be easy…

“Thrilling, bloody, and fun.”
– Looking for a Good Book

“James Moore has become one of my favorite writers.”
– Adventures Fantastic

“Fallen Gods was quite enjoyable, I look forward to the conclusion, and I hope to see these ravenous gods be sacrificed for the good of all. 4 out of 5 stars”
– Shelf Inflicted

“The novel once again demonstrates why James A Moore is at the forefront of the modern masters of sword and sorcery.”
– Book Wraiths

“Moore’s creativity shines through with a new world, new pantheon, new monsters, new nations and continents. The characters live and breathe and pop from the page – often with swords swinging.”
– Paul’s Scribblings

Praise for The Last Sacrifice

“With The Last Sacrifice, James A. Moore has triumphed yet again, delivering a modern sword and sorcery tale to delight old and new fans of the genre.  With its intriguing premise, stellar cast of characters, and flavorful horror elements, this is damn good stuff.”
– Bookwraiths