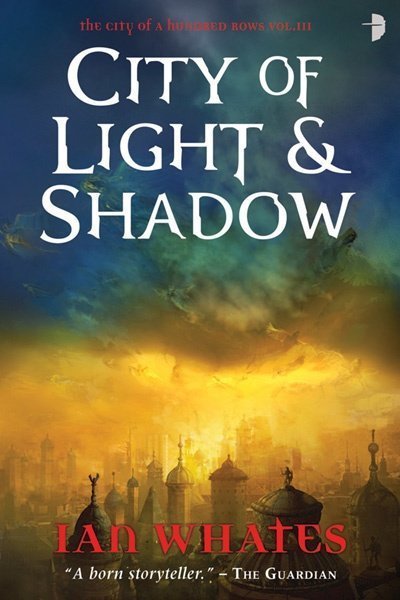 City of Light and Shadow

“A deft mix of intrigue, assassination and romance culminates in a desperate fight for Thaiburley’s existence, and along the way Whates finally reveals the true nature of the city itself. Compulsively readable.”
– The Guardian

The Monstrous Rust Warriors are Back! Street-nick Tom, Dewar the Assassin, and the Prime Master reach the ends of their journeys, but who will survive?

The Third Book in the City of a Hundred Rows Series

THE MONSTROUS RUST WARRIORS ARE BACK!

In a land struggling to cope with the onset of the fatal bone flu, street-nick Tom and Kat – the leader of the Tattooed Men – must find a way to dispatch both threats.

Meanwhile, the Soul Thief is still at large, and still killing…

“Adventures in a nightmare citadel – a story that hits the ground running
and doesn’t let up.”
– Liz Williams, author of the Detective Inspector Chen series

“…the fast pace and plentiful action scenes make for a very entertaining story … It’s one of those books you blaze though in a day or two.”
– Val’s Random Comments