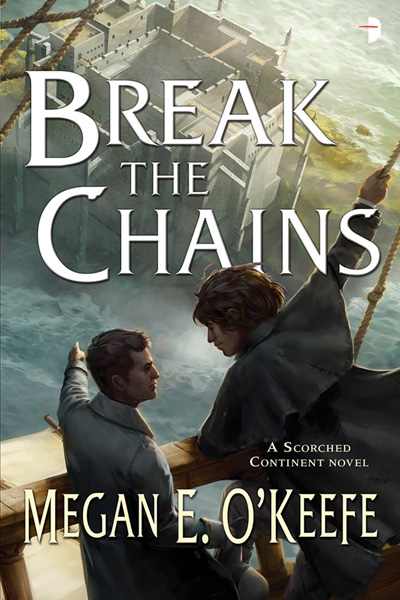 A year has passed since Detan set the skies above Aransa on fire, and the armies of Aransa’s new dictator Thratia are preparing to knock on the door of his aunt’s city, Hond Steading…

File Under: Fantasy [ Century Gates | The Remnant Isles | Break In, Break Out | Away, Away and Up! ]

The second book in the Scorched Continent series

A year has passed since Detan set the skies above Aransa on fire, and the armies of Aransa’s new dictator Thratia are preparing to knock on the door of his aunt’s city, Hond Steading. As the city that produces the most selium – that precious gas that elevates airships and powers strange magic – Hond Steading is a jewel worth stealing. To shore up the city’s defenses, Detan promises his aunt that he’ll recover Nouli, the infamous engineer who built the century gates that protect the imperial capital of Valathea.

But Nouli is imprisoned on the Remnant Isles, an impervious island prison run by the empire, and it’s Detan’s fault. Detan doesn’t dare approach Nouli himself, so his companions volunteer to get themselves locked up to make contact with Nouli and convince him to help. Now Detan has to break them all out of prison, and he’s going to need the help of a half-mad doppel to do it.

“The dialogue was awesome, the details were everything I wished all books would include more of and I continue to be fascinated by the harsh setting and great worldbuilding. O’Keefe masterfully manipulated my emotions and completely shredded my heart and, as a writer, I am so impressed; as the heartbroken reader, I’m anxiously awaiting Inherit the Flame.”
– Erlebnisse

“Heartwarming camaraderie and an endless supply of crossbow bolts make Break the Chains one of the most fun novels of 2016.”
– Cowering King

Praise and Reviews for Steal the Sky: