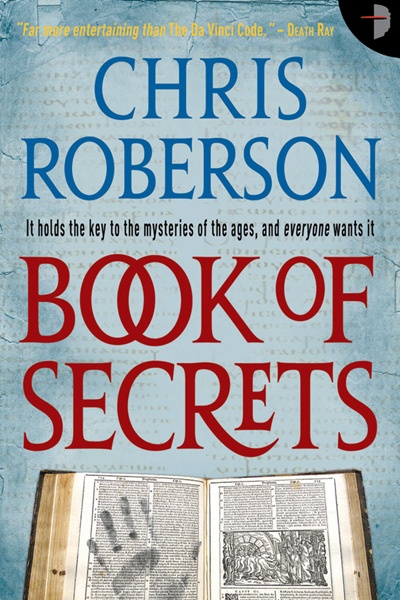 This tremendous modern fantasy is like The Da Vinci Code rewritten by the Coen Brothers. Already critically acclaimed worldwide for both his SF and fantasy series, Chris Roberson is at the very height of his powers. A lost classic, originally self-published by Chris as Voices of Thunder back in 2001, this revised, definitive edition, from the author’s preferred text, is published for the mass-market for the very first time.

Reporter Spencer Finch is embroiled in the hunt for a missing book, encountering along the way cat burglars and mobsters, hackers and monks. At the same time, he’s trying to make sense of the legacy left him by his late grandfather, a chest of what appear to be magazines from the golden age of pulp fiction, and even earlier.

“Book of Secrets incorporates many of the author’s favourite tropes. The love for golden age pulp is here as is the idea that books hold power, that ideas have weight and shape and form. It’s a fascinating book, paced at breakneck speed with a hard nosed first person narrative and some great offhand jokes. The real star here is Roberson’s easy going prose, that carries some big ideas along with elegance and grace and places the story in a unique hinterland somewhere between steampunk and action thriller, weaving Spencer’s life into ancient Greek literature and the pulp stories written by his grandfather. A smart, literate thriller written by an author whose love for the form is clear.”
– Alasdair Stuart

“This mash-up of 1930s pulp fiction with dreams of a secret heritage accessible only to the chosen is far more self-aware and entertaining than The Da Vinci Code. Born of Roberson’s deep affection for radio serials, comic strips and writers like Michael Moorcock and Gray Morrow, this affectionate look at finding oneself and finally coming to terms with one’s roots is accessible, entertaining and made two hours whip past almost unnoticed. In line with the conventions of the genre, girls are accessories here, but it would be churlish to take offence when the story is so entertaining.”
– Death Ray

“Incredibly well done and is a book that has to be applauded for its bravery in this new style of creation. Definitely a book that can spawn a series and one that I hope will continue to expand with each future release. Great stuff.”
– Falcata Times

“Book of Secrets is a book of genres. In other words, it is a celebration of the age of pulp with a meta-fictional slant. It moves in two directions–a very readable first person narrative in the form of a crime novel that progresses to the conclusion of the mystery and a fantasy novel that moves in reverse to disclose the nature of the universe. Roberson is just a damn fine writer. He writes a good sentence; the novel is structured like a Swiss watch and paced like a Tennessee walker… In the time of the post-Tolkienians and the novel as brick, Book of Secrets is unique, refreshing, breezy, and fun.”
– Red Rook Review

“This is a very enjoyable novel of speculative fiction. It’s a rip-roaring read with a multi-layered plot and an original and surprising conclusion. I can see myself re-reading it for pleasure in future. What more can you ask of a book?”
– SF Crowsnest

Chris Roberson is obsessed with superhero comics, pulp fiction, puppetry, animation, history, and science, and has a Bachelor of Arts in English and Liberal Arts Honors from the University of Texas at Austin, 1992. His books include the novels Here, There & Everywhere, The Voyage of Night Shining White, Paragaea: A Planetary Romance, X-Men: The Return, Set the Seas on Fire, End of the Century, Iron Jaw and Hummingbird, The Dragon’s Nine Sons, Three Unbroken, and Warhammer 40,000: Dawn of War II, and the comic book mini-series Cinderella: From Fabletown With Love. His short stories have appeared in such magazines as Asimov’s Science Fiction, PostScripts, and Subterranean.

Along with his business partner and spouse Allison Baker, he is the publisher of MonkeyBrain Books, an independent publishing house specializing in genre fiction and nonfiction genre studies. He has been a finalist for the World Fantasy Award four times—twice for publishing, and once each for writing and editing—twice a finalist for the John W. Campbell Award for Best New Writer, and three times for the Sidewise Award for Best Alternate History Short Form (winning in 2004 with his story “O One”). He lives in Austin, Texas.