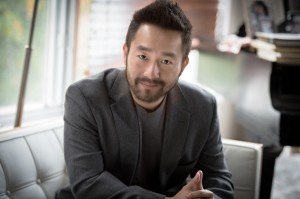 This weekend our very own robot author Wesley Chu, author of Time Salvager, Time Siege, the Tao series AND The Rise of Io will be at MCM London Comic Con! Wesley will be on a couple panels sharing wisdom and blowing your human minds!

Wes will be signing both Friday and Saturday, however has two panels on the first day, which you can see below:

As you know, we’re about to embark on our #AROpenDoor2017 (yes, we’ve hashtagged it, go with us on this). So far we’ve told you what we want, what we don’t want, and given you some top notch, high quality robot GIFs, you lucky ducks!

But what about author experience of the process? Well right now, for your reading pleasure, we’ve a little blog post from our 2011 Open Door alumni, Wesley Chu. You may know Wes’ name as he now has three successful series under his belt, with one currently in development for TV and the another for the big Eeeek! Our Wesley Chu is doing a reading from The Rise of Io at 7PM on November 16 at Volumes Bookstore in Chicago.

Even better, Wes will be joined by authors Mary Robinette Kowal and Dan Wells.. The night will comprise of readings from each author, signings and a discussion. As a mark of his great success with his three Tao novels for Angry Robot, that man Wesley Chu has been invited to pen a novella with a new story from that world for the prestigious Subterranean Press. At the end of April they will be issuing The Days of Tao in the USA as an exclusive limited edition. On 15 July at 8pm (PDT), Wesley Chu and Ramez Naam will be visiting Elliott Bay Book Company, for a joint Angry Robot  event.

Wesley will be reading from his latest book, Time Salvager, while Ramez will be treating guests to a reading from the final instalment in his Nexus trilogy, Apex. They will also both be happy to answer questions and sign things, too.

Time Salvager: In a future when Earth is a toxic, abandoned world and humanity has spread into the outer solar system to survive, The World English deal, signed with agent Russell Galen, is for Wesley’s new standalone series starting with The Rise of Io, publishing in August 2016. Although The Rise of Io is set in the same warring Genjix and Prophus universe as the Lives of Tao books, this brand new series will open the Quasing world to new readers as well as fans of the hugely successful We bring you holiday greetings and an interview with Wesley Chu, author of The Lives of Tao and the newly released sequel The Deaths of Tao!

Don’t forget to read Wesley’s Christmas blog post, and get his ebooks for just one shiny new pound! (or about US $1.30)

As part of our 12 Days of Christmas, we’re bringing you some of your favourite authors talking about what Christmas is to them…in whatever form they like! We’re also bringing you their books at only £1!

Today is the turn of Wesley Chu, author of the just-released The Deaths of Tao, and the Goodreads Choice Awards 2013 Top 10 hit, The Lives of Tao.

1. Visit the Robot Trading Company at www.robottradingcompany.com
2. Add the book(s) you’d like

Eighteen months ago, the raging automatons and I made an alliance to take over the world. With their massive droid army and worldwide distribution, and my Kung-Fu grip and bravely stupid bravery, we’ve embarked