Live in the City of Dreams & Nightmare with Two Free Chapters! 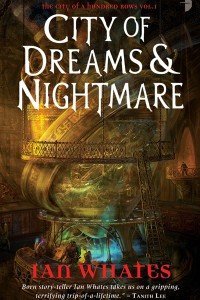 Happy Friday! If you haven’t explored the City of 100 Rows, now is an excellent time. The first in Ian Whates’ amazing fantasy series, City of Dreams & Nightmare is the new Gormenghast – “brilliantly executed novel, perfectly paced, beautifully described and a true joy to read.” (ScienceFictionandFantasy.co.uk)

They call it the City of a Hundred Rows.

The ancient city of Thaiburley is a vast, multi-tiered metropolis, where the poor live in the City Below and demons are said to dwell in the Upper Heights.

Having witnessed a murder in a part of the city he should never have been in, Tom, a lowly street-nick, has to run for his life through the City Below, Thaiburley’s unsavoury basement world. Accused of committing the murder himself, he is pursued by sky-borne assassins, Kite Guards, and agents of a darker force intent on destabilising the whole city. His only ally is Kat, a renegade like him, but she proves to have secrets of her own…

Check into the first two chapters below:

And now move in for real: