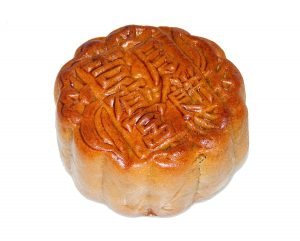 Moon Festival, also known as Mid Autumn Festival, falls on the 4th of October this year. It is the 15th Day of the Eighth Month[1] by the Chinese reckoning. It is when the moon is the roundest and we are meant to sip tea, eat mooncake and admire the moon.

This occurs just between the two book birthdays of my debut novel, Under the Pendulum Sun. I know these days as the Awaiting the Moon and the Chasing the Moon respectively. As I will undoubtedly be spending them eating mooncake, I thought I’d share a few thoughts on the oddities of this category of pastry and what they mean to me.

Every year as more exciting new mooncake flavours flood the market and my father mutters to himself that he’s a traditionalist about such things, I find myself asking the question: What is a mooncake? Let us begin at the beginning.   Mooncake is a baked good with a crust, a sweet filling and a salted duck egg yolk. The crust is shaped in a mould and often has the name of the bakery and mooncake written on it. When cut open, the cross section of the mooncake displays its round yellow yolk against a background of dark brown (red bean paste) or grey (lotus paste), the night sky in miniature.

But it is not that simple.

Almost every single aspect of this description is a lie and I will be able to find you a mooncake that defies it. We now have snow skin mooncakes that are not baked but are in fact basically shaped mochi that need to kept in the freezer. We have savoury mooncakes with fillings of minced pork. We have ice cream mooncakes and cream cheese mooncakes. There are those with flaky crusts and no characters written on them whatsoever. Custard mooncakes have decided against having the secret moon inside and is just one glorious round yellow pastry (thus it is the moon itself). So I am faced always with that question, how can something lack a unifying definition and still be so very, very recognisable? After all, no matter how much my father grumbles about his preference for good old lotus paste and duck egg, he has never denied that ice cream mooncakes *are* mooncakes. Our culture hasn’t, to him, gone collectively mad.

The story normally told of the moon is of Chang E, the goddess who resides upon it, either in exile or imprisonment, depending on who you ask. If there is an elegant lady on your mooncake box, it’s almost certainly her. As the story goes, her husband was the hunter who shot down the nine suns that were crowding the sky and rewarded with both a throne and elixirs of immortality. He became cruel with power and in order to prevent the perpetuation of his tyranny she stole his elixir. Caught, she panicked and swallowed the elixir. With that, she floated to the moon. To me, the mooncake is a confection with a metaphor, a secret to tell. It is that reveal of the moon, or the many treasured nuts, or simply the surprise of the filling. When I eat it, I think of the folk tales of the Ming revolutionaries hiding secret notes inside mooncakes or in the pattern etched onto mooncake’s crust. The ruling class of Mongols did not celebrate the Moon Festival, after all, and the Han were known for the excessive gift giving of mooncakes so the conspiracy was undiscovered.

The other story I am reminded of is a scene in the iconic The Lovers film (Tsui Hark, 1994), where oblivious scholar Shan Pak paints the face of his friend and fellow scholar, the crossdressing Ying Toi. It is the Moon Festival and the literati are bursting with poetic emotion, reciting epic lines and sipping tea. The application of makeup here is framed as romantically intimate, as it is said that a husband draws on the eyebrows of a wife, and yet the makeup itself is coded masculine by the fact that they are putting it on in emulation of the masculine literati. It is a moment of emotion and attraction between the two, but the masculine and feminine are equally blurred in that moment. Many other retellings of this or other classic Chinese crossdressing romances[2] would contrive a moment where the disguised heroine would have to put on feminine clothes. She dresses up as Kwan Yin for a festival, for example, etc. But Tsui Hark’s The Lovers decided on a different, rather more queer-coded route. There is even acknowledgement of explicitly homoerotic attraction of the other scholars within the school[3] [4]. It may not hold up now but it was one first queer things I was exposed to and it decidedly shaped me. And thus is so that the Moon Festival gained for me these connotations of secrets told, of masks that reveal the truth and of the blossoming of repressed queer romances. Mooncakes can be rigidly defined as merely lotus paste baked in a glossy crust, but there is more to them than that. And I hope you will hold that in mind with you next bite into one.

[1] Fun fact, due to this calendar being a lunar one, it has all sorts of interesting idiosyncracies, including Leap Months. One year, we had two Eighth Months and I ate twice the amount of mooncake. It was brilliant.

[2] It’s a bit of a trope in Chinese literature and now popular culture. It’s not just Shakespeare who has witty crossdressing heroines.

[3] The subtitles term him “sissy” which is really, really off for me. Especially Cantonese term used is more analogous to bent (in contrast with straight). And given how I struggle to name another crossdressing narrative that’s this queer

[4] I lie. The orignal 1963 The Love Eterne, telling the same story, does star actress Ivy Ling Po as male romantic hero Liang Shanbo. We thus have an actress play a male romantic hero in love with an actress playing a crossdressing female character. It was so insanely successful that the Shaw Brothers actually destroyed the other movie they had completed (but not screened) where Ivy Ling Po played a female character.