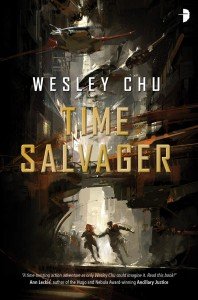 You may have seen the news on Den of Geek that Zak Olkewicz is currently adapting Wesley Chu’s Time Salvager for director Michael Bay.

Bay, probably most famous for Armageddon, Pearl Harbor and the Transformers franchise will be taking on Wes’ tale of chronman James, who returns to past earth one final time in order to recover resources but ends up bringing back more than he anticipated, in the form of scientist Elise Kim.

We’re absolutely delighted that our Wes has reached the dizzying heights of film adaptation and we’re already planning a UK screening party for our friends, when the time comes. There will be popcorn, so much popcorn.

If you want to get in on the action pre-big screen, you really should buy a copy of the book here and its sequel, Time Siege here. (UK/Commonwealth residents only, US/Can residents can buy the novel from Tor Books.)