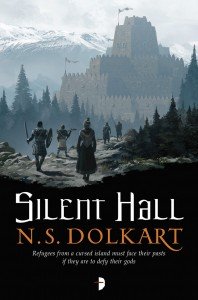 Good news, those who love audiobooks! N S Dolkart‘s Silent Hall is now available through Audible. Narrated by Adam Sims (Hard-Boiled Wonderland and The End of The World / World War Z) aural story lovers can expect an epic fantasy of breathtaking scope full to the brim with wizards, angry gods and dragons.

After their homeland is struck with a deadly plague, five refugees cross the continent searching for answers. Instead they find Psander, a wizard whose fortress is invisible to the gods, and who is willing to sacrifice anything ‘ and anyone ‘ to keep the knowledge of the wizards safe.

With Psander as their patron, the refugees cross the mountains, brave the territory of their sworn enemies, confront a hostile ocean and even traverse the world of the fairies in search of magic powerful enough to save themselves ‘ and Psander’s library ‘ from the wrath of the gods. All they need to do is to rescue an imprisoned dragon and unleash a primordial monster upon the world. How hard could it be?

To grab your very own audio version of Silent Hall, just click here.