A tear in the fabric of reality gives readers in USA, Canada, Australia and the UK 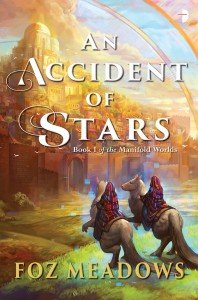 the opportunity to read Foz Meadows‘ portal fantasy for the 21st century: An Accident of Stars at a startling price. On 19 May take your chances in another world with Bookbub… just $1.99 in the US, Canada and Australia and 99p in the UK.

“A portal fantasy for grownups, with grit and realism, and characters I loved from the first page.” – Trudi Canavan, author of the Black Magician trilogy

When Saffron Coulter stumbles through a hole in reality, she finds herself trapped in Kena, a magical realm on the brink of civil war. There, her fate becomes intertwined with that of three very different women: Zech, the fast-thinking acolyte of a cunning, powerful exile; Viya, the spoiled, runaway consort of the empire-building ruler, Vex Leoden; and Gwen, an Earth-born worldwalker whose greatest regret is putting Leoden on the throne.

But Leoden has allies, too, chief among them the Vex’Mara Kadeja, a dangerous ex-priestess who shares his dreams of conquest. Pursued by Leoden and aided by the Shavaktiin, a secretive order of storytellers and mystics, the rebels flee to Veksh, a neighboring matriarchy ruled by the fearsome Council of Queens.

Saffron is out of her world and out of her depth, but the further she travels, the more she finds herself bound to her friends with ties of blood and magic. Can one girl ‘an accidental worldwalker’ really be the key to saving Kena? Or will she just die trying?