Judgement is Coming – Free Excerpt of Dominion by Peter McLean

Our favourite foul-mouthed demon-botherer Don Drake is back in the second of Peter McLean’s Burned Man series, Dominion – A dark neo noir set beneath London, written with all the charm of your favourite British gangster movies. As the sequel to Drake and followed by the upcoming (just under a month, folks!) Damnation, there’s plenty more of this gritty urban fantasy to explore. 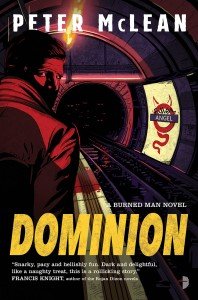 In the tunnels deep under London, the Earth Elementals are dying.

Hunted by something they know only as the Rotman, the Elementals have no one trustworthy they can turn to. Enter Don Drake, drunken diabolist and semi-reformed hitman, and an almost-fallen angel called Trixie.

When Don learns that Rotman is actually the archdemon Bianakith, he knows this is going to be a tough job. The fiend is the foretold spirit of disease and decay whose aura corrupts everything it comes near, and even the most ancient foundations of London will crumble eventually. Now Don, Trixie and his ever-annoying patron the Burned Man have to hatch a plan to keep Bianakith from wiping out the Elementals and bringing down the city. But the Burned Man has other plans and those may have dire consequences for everyone.

The past never stays buried, and old sins must be atoned for. Judgement is coming, and its name is Dominion.

Get stuck into the world of Don Drake now: