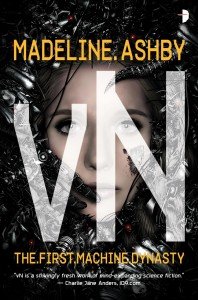 Exciting discount news robots!
Do you love zombie robots, vampire robots, humanoid robots, and anything robot? Then you’ll want to get your hands on the epic cyberpunk world of Madeline Ashby’s  vN, book 1 of the First Machine Dynasty. On January 9th you can plug vN into your memory drive with a BookBub bargain!
Take a look at the synopsis of vN: