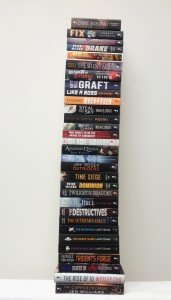 Well, 2016 was a busy old year for us, what with publishing many wonderful, wonderful books, continuing to take over the world, offering human sacrifices to the gods, that kind of thing.

It seems our sacrifices haven’t gone unnoticed as we have found our books placed in a whole load of ‘best of 2016’ lists, which has, quite honestly, made out 2017 thus far.

We’d like to say a big thank you to everyone who took the time to read, review and rave about our books. It really does mean the world to us, you guys keep us doing what we do and help us strive to release the best in SF, F & WTF last year, this year and to infinity and beyond (we might have nicked that quote from somewhere).

So, for your perusal, here’s a rundown of our books, placed in the annals of ‘best book’ lists.

Matthew De Abaitua’s If Then

Foz Meadows‘ An Accident of Stars