Come, sit, drink a tea and check out the absolutely badass updated (and one new) covers we have for Madeline Ashby’s Machine Dynasty series. Each of these fine pieces of art can be credited to Martin Bland AKA Spyroteknik.

‘But why the updates?’, you ask. Well, we’re reissuing the first two books in mass market format (US/Can) at the start of 2017 and then in May Rev, the third title in the series will be hitting shelves.

For those who are yet to embark on the Machine Dynasty series, it’s a dark, twisted and brilliant series that explores the nature of man – and specifically men – when given power over AI – specifically synthetic women and girls. This is far removed from the coy, cute little girl robots you’ll find in some traditional science fiction. The series might be delivered with the drama and pacing of an action movie, but it’s the science fiction that properly explores a near future that will soon be upon us.

Take a look at the synopsis for each below, alongside the new cover art. “Ashby’s debut is a fantastic adventure story that carries a slyphilosophical payload about power and privilege, gender and race. It is often profound, and it is never boring.”
– Cory Doctorow, BoingBoing 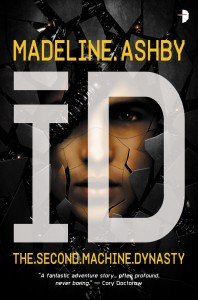 “The world that Ashby envisions is fascinating, filled with strange ideas, nifty technology, and some rather mature implications. Asimov might have given his robots the Rules, but Ashby doesn’t shrink back from exploring a world where disposable, artificial, life-forms who must obey or die, have become relatively commonplace. iD is not always a happy, easy, or comforting read, but it’s certainly an intriguing one, and a refreshingly thoughtful exploration of the themes.”
– Tor.com In the third and final instalment of the Machine Dynasty, the rapture for which the self-replicating humanoid vN were engineered finally comes to pass. Now that the failsafe that once kept vN from harming humans has been hacked, all vN are discovering the promise – and the peril – of free will.

Her consciousness unleashed across computer systems all across the world, the vicious vN Portia stands poised to finally achieve her lifelong dream of bringing humanity to its knees. The old battle between her and her grand-daughter Amy comes to its epic conclusion in the war for the very systems that keep the planet running.

Can Amy get her family to the stars before Portia destroys every opportunity for escape and freedom?

Now, sit back and let the excitement grow. In the meantime, we’ll leave you with the covers side-by-side for optimal viewing pleasure. 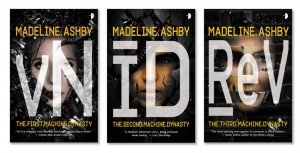