To celebrate the anniversary Angry Robot will be re-releasing Infernal Devices this coming February, with a re-release of second-in-series Fiendish Schemes arriving in April. This is the first time that Fiendish Schemes will be released outside of the US/Canada, so be ready, UK/Commonwealth fans! Finally, we’ll be publishing K W’s brand new novel, Grim Expectations, the third of the George Dower series, in June 2017.

Each book has a brand new cover, created by the ever-brilliant John Coulthart, and let us tell you, they are WONDERFUL. If you’d like to take a look at them and hear a little from K W about his thoughts on both the covers and the series in general, head over to Tor.com for some exclusive content. In the meantime, here’s a little teaser for you: 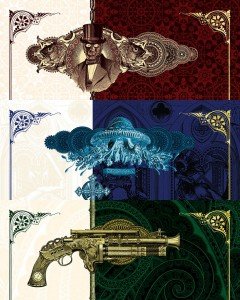