As you may remember, we’re publishing Christopher Hinz‘s Binary Storm – the prequel to his 1980s classic Liege-Killer – this September.

Nick Guerra, computer programmer and brilliant strategist, hooks up with Annabel Bakana, the savvy new director of E-Tech, an organization dedicated to limiting runaway technological growth. Together both romantically and professionally, they secretly assemble a small combat team to hunt and kill binaries.

Now, we’re delighted to share the glorious cover, created by the incredible Larry Rostant, with you. Well, a teaser of it at least. If you’d like to see the whole shebang head over to the B&N Sci-Fi & Fantasy Blog to view it in all of its glory, alongside an exclusive preview of the first chapter. 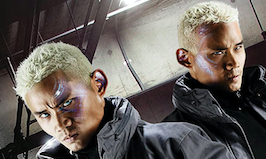