It’s Friday, and we wanted to share with you the fabulous new cover for Paige Orwin‘s The Interminables, created by the excellent Will Staehle, plus some very exciting exclusive content!

For a link to the cover, which we hope you’ll love just as much as us, plus an exclusive extract of the first chapter AND a blog post from Paige, keep reading. Firstly though, here’s the synopsis:

It’s 2020, and a magical cataclysm has shattered reality as we know it. Now a wizard’s cabal is running the East Coast of the US, keeping a semblance of peace.
Their most powerful agents, Edmund and Istvan — the former a nearly immortal 1940s-era mystery man, the latter, well, a ghost — have been assigned to hunt down an arms smuggling ring that could blow up Massachusetts.

Like the sound of the book? Then pop over to the B&N Sci-Fi & Fantasy blog to read the first chapter of the novel.

To see the cover and read a blog post on Paige’s creation of Istvan the avatar of war, just the teaser image below to be taken to the article. 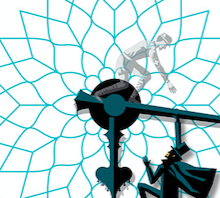