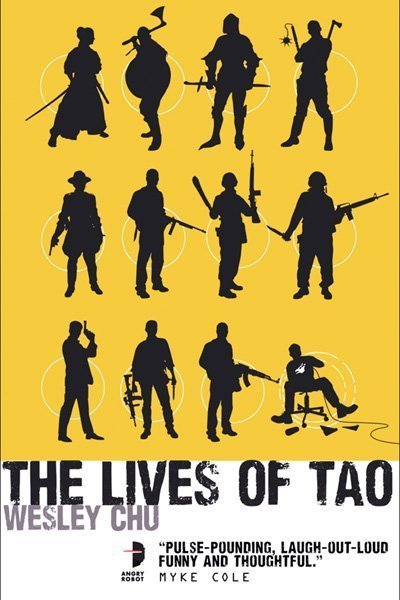 The Lives of Tao

One day an overweight slacker named Roen wakes up with a strange voice in his head. He soon comes to learn that the voice is a disembodied alien who crashed to earth millions of years ago. The alien, called Tao, is part of a cohort of aliens called Quasing that crash landed together. Since the fall of the Roman empire, the aliens have been waging a war to decide the best means to get home – the pragmatic Genjix do not care if their methods destroy humankind while the more gentle people of Tao’s tribe are prepared to take a less destructive approach.

The first book in The Lives of Tao series

“In The Lives of Tao, newcomer Wesley Chu delivers an action-laced sci-fi thriller filled with clever ideas and witty, engaging characters. A thoroughly enjoyable ride.”
– John Marco, author of The Inhumans and the Tyrants and Kings trilogies

“Few books begin more engagingly than The Lives of Tao, a science fiction romp which wears its principal strength – the wit and humor of the narrative voice – on its sleeve.”

“A science fiction story that is one part spy novel, one part buddy flick, one part comic book, one part eye-opener history lesson…among many other elements. Yes, it’s a lot of parts, but they blend together quite well.”
– Examiner

“Ian Flemming with lattes instead of martinis… The premise was fun, the pace was exciting, the writing was engaging, the story was compelling, the characters were likeable, and the humor was appealing.”
– Fantasy Literature

“I would highly recommend this book to fans who like their espionage tinged with sci-fi, or vice-versa.”
– Scott at Being a Big Sandwich

“I think The Lives of Tao was very well done and I will definitely keep my eye out for the next one. Between the humor and the originality of the story, I would certainly recommend reading it.”
– Lisa at Wilder’s Book Reviews

“The Lives of Tao marvelously casts all of war, science, politics, religion, and economics into a stark new light. It switches well between action-packed scenes and philosophical discussions about human nature and the pitfalls of manipulation, even guided by the best of intents.”
– Josh at Examiner.com

“By the end of the books I was close to tears, which proves my emotional investment in the characters and their fates. I wish every book made me care about the characters as much as The Lives of Tao.”
– I Will Read Books

“We get the full sci-fi feeling combined with the spy genre without either side getting diluted or ignored. We get the full effect and in turn get a character we care about.”
– Tome of Geek

“The whole “aliens-on-earth-inhabiting-human-bodies” plotline has been done more than once, but not like this.  Once I started reading, I couldn’t put it down. ”
– Geeky Library

“There’s plenty here to enjoy. Chu choreographs vivid action scenes, he injects humor seamlessly into dialogue, and he makes the world-building fun. Chu had all of history at his disposal, after all, and he took full advantage.”
– Blackgate

“This doesn’t seem like Chu’s first book, he writes with panache, skill and confidence. His action scenes feel authentic, his world is intricate and believable, and he tells his story in a compelling manner that keeps you turning pages.”
– The Irresponsible Reader

“The Lives of Tao exceeded my expectations. I didn’t know beforehand if this would be a good fit for my reading mood, but the combination of relatable and likable character in Roen with the deep but not overwhelming worldbuilding in the secret alien war and finally the cool spy action all made this one of my new favorite series. I hear it keeps getting better, so I’m excited for continuing on with The Deaths of Tao and The Rebirths of Tao. I enjoyed the audiobook narration so much, I’d really like to continue in that format.”
– Adventures in Sci Fi Publishing (Audiobook Review)

“With a rewarding conclusion, The Lives of Tao is a highly recommended read from Angry Robot.”
– T Bird Studios