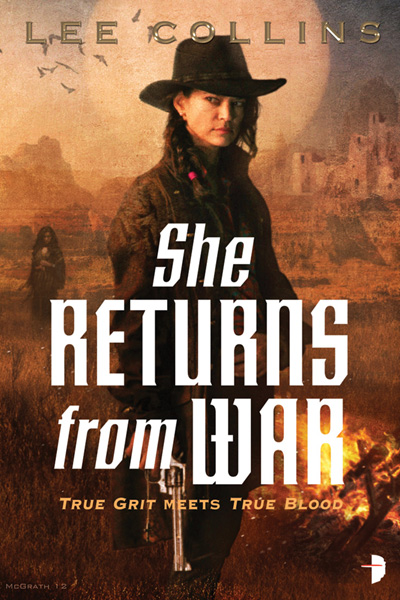 She Returns From War

“This really is fresh air in the world of supernatural hunters … Recommended for fans of Kate Griffin and Chris Holm. 9 out of 10.”
– Mel’s Random Reviews

Cora Oglesby is back on the case when an English tourist unleashes a terrifying Navajo legend from sleep in this Dead of Winter sequel.

Four years after the horrific events in Leadville, a young woman from England, Victoria Dawes, sets into motion a series of events that will lead Cora and herself out into the New Mexico desert in pursuit of Anaba, a Navajo witch bent on taking revenge for the atrocities committed against her people.

“A well paced and intriguing story that left me satisfied with my overall experience. I would HIGHLY recommend that if you are thinking about reading this series, go out and borrow or buy The Dead of Winter first! You won’t be sorry that you did.”
– Shelley Romano, Gizmo’s Reviews

“She Returns from War is a fun continuation of the world Collins has been building, and he sets the stage for further expanding this world in future books. I look forward to seeing where he goes next.”
– Mike, Untitled*United

“Lee Collins’ follow-up to The Dead of Winter isn’t what you might expect – and that’s a very good thing … Like his characters, Collins hasn’t been afraid to take a risk, and it pays off.”
– Paul Simpson, Sci-Fi Bulletin

“This is a different book from the first one [The Dead of Winter]. That’s a good thing, because it means the author isn’t locking himself into a formula, in essence refusing to become a one trick pony … I recommend them both highly.”
– Keith West, Adventures Fantastic

“She Returns From War is a most excellent novel, and lives up to the promise of The Dead of Winter.”
– Shadowhawk at The Founding Fields

“I was reminded a few times of the movie Unforgiven, with the younger generation getting a look at the real life of a legend, and also learning about the costs of living such a life.”
– Kathy at Kindle-aholic’s Book Pile

Other books in Fantasy, Horror